Sharing today, one of my favorite Indian Bread, Garlic Butter Naan which is easy to cook, and don't need yeast or lengthy fermentation time.

In India, everyone still don't feel comfortable using yeast in everyday cooking. Few weeks ago, when I shared Garlic Naan, everyone back home expected it to be without yeast.  Few of my friends even asked me to post a no-yeast method... Saying "post an everyday easy naan recipe, Savita!" Well, if you ask me, I always think yeast naan is very easy to make.... However, I get the point.

So for anyone looking for a quick and easy everyday Garlic Naan Bread, I thought it would be good to share a recipe that needs no yeast or not much resting time. This recipe also comes with a little personal touch... Read on to unfold.... 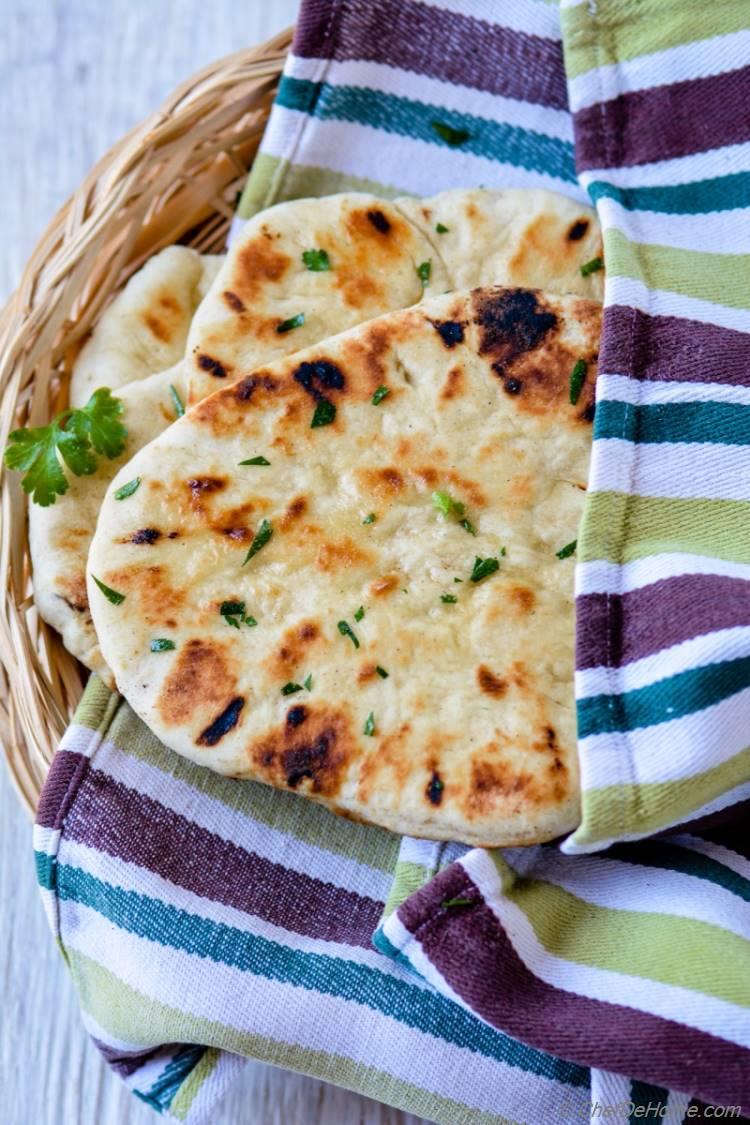 What does Yeast Do?

If you can find yeast in your local store and can spare sometime to allow yeast to ferment the dough, you can try my Garlic Naan Recipe which uses yeast.

How to get Fluffy Naan without Yeast?

Well, good question! Let me share with you, how?!

Other than yeast, what leavening agent you can think of which can give airy texture to a bread? These are: baking soda, baking powder, and eggs. So in many naan recipes, all over internet and even in cookbooks, egg and baking powder/soda are added (a lot) to get fluffy (bubbles) texture without yeast.

However, a naan bread that is heavy in baking soda or egg can taste very dense, egg-y and will be very heavy on stomach. When I was trying to get a perfect naan recipe without yeast, I did mess up few batches which tasted very egg-y or unappealing due to soda.

So, after a few experiments, I decided to get rid of fatty egg-yolk from egg and reduced the amount of soda to almost negligible. To my surprise, this change really made me like no-yeast bread! Right at that point, I knew, I have a recipe to share! (finally!)

You know, garlic naans or butter naans in general, are special favorite of my better-half. He did not like a single batch which was heavy on egg. But, when I gave him to taste the naan, I'm sharing today, he could not judge if this one is yeast garlic naan or not!

hurrah!!! Worth all effort for me!! 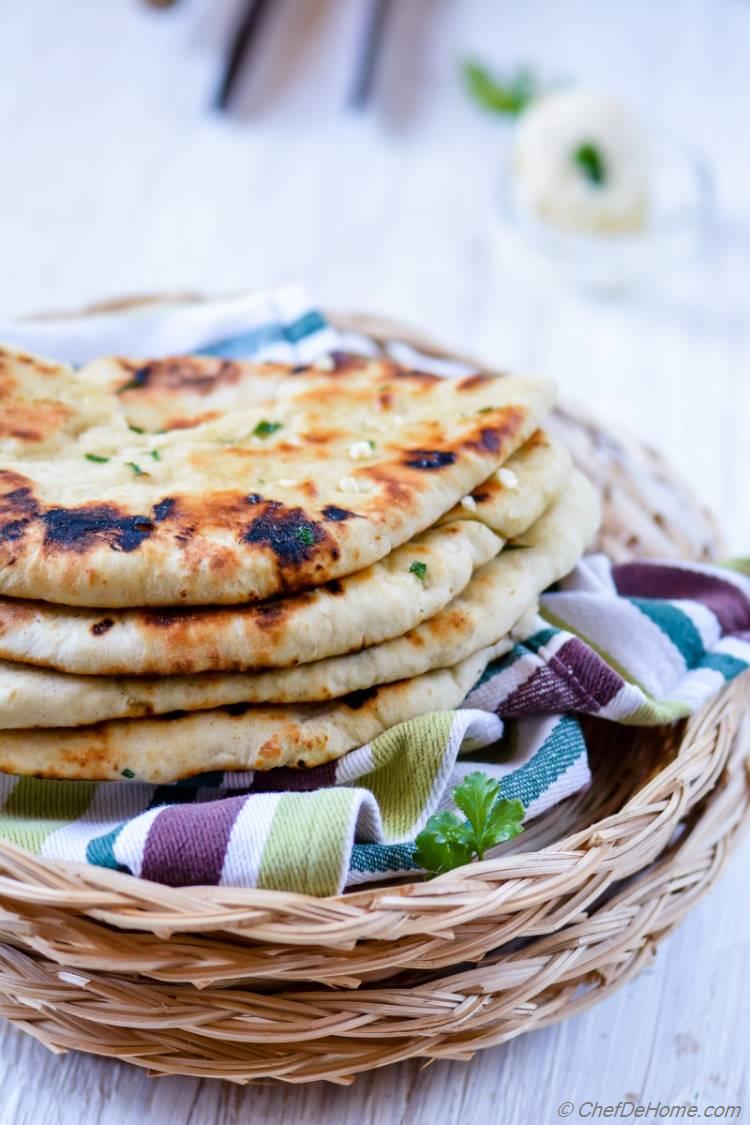 One thing is certain, these naans will sure make you forget store-bought naan. Plus these are healthier than store naans! Chances are, you might start making'em at home very often than picking a packet from store. I promise!

You know the best part, these naans can also be baked in household oven. I always tell you, Indian traditional Tandorr is much much high-heat vessel than household oven. So, home oven, due to low heat, (yes, you reading correct), results in not-so-good baked yeast naans. However, addition of egg, in naan dough, keeps them moist and fluffy when baked in home oven.

This recipe has become my favorite when I have few guests coming over. Just roll a couple of naans, put on hot sheet pan and bake. Much easier than rolling and searing each naan on tawa (iron skillet), one at a time. Isn't it? So, I have included both instructions, cook on tawa or bake in oven below. 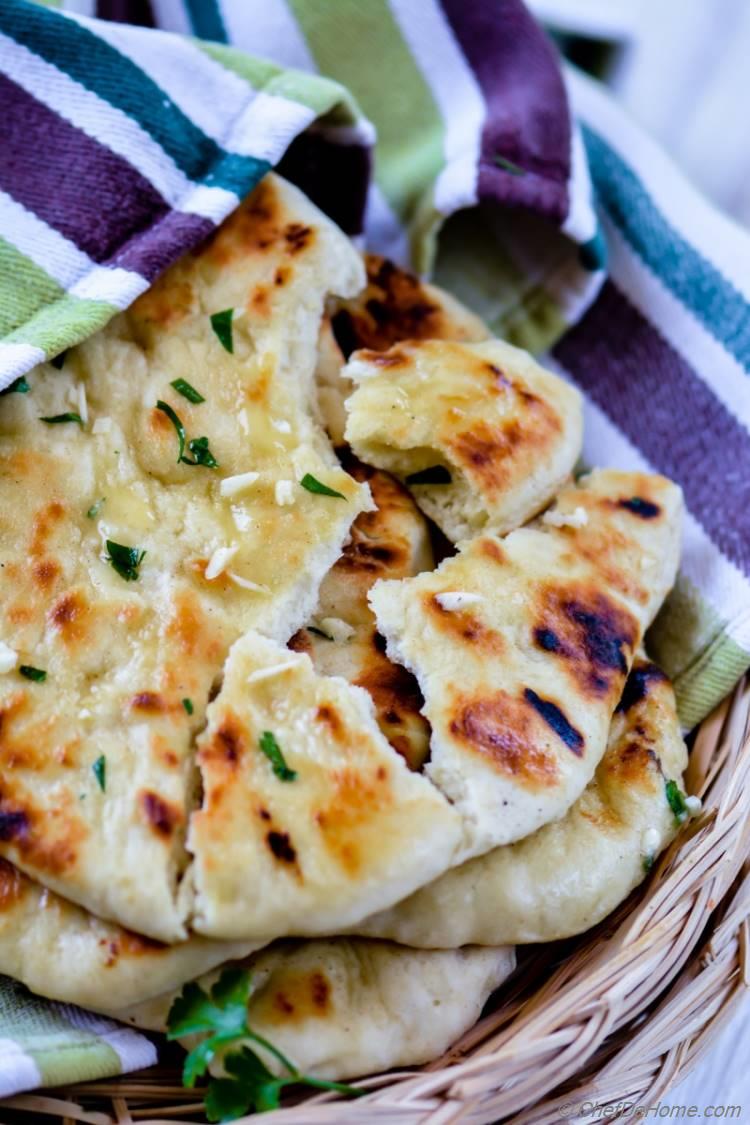 Unlike Yeast Naan, I don't recommend freezing Egg Naans. These are best when served just out of the oven. You can cook'em 2-3 hours in advance though. Then, just before serving..... Just like you warm tortillas, wrap naan in damp kitchen towel and microwave for 20-30 seconds. This will freshen-up the texture and make'em moist again. 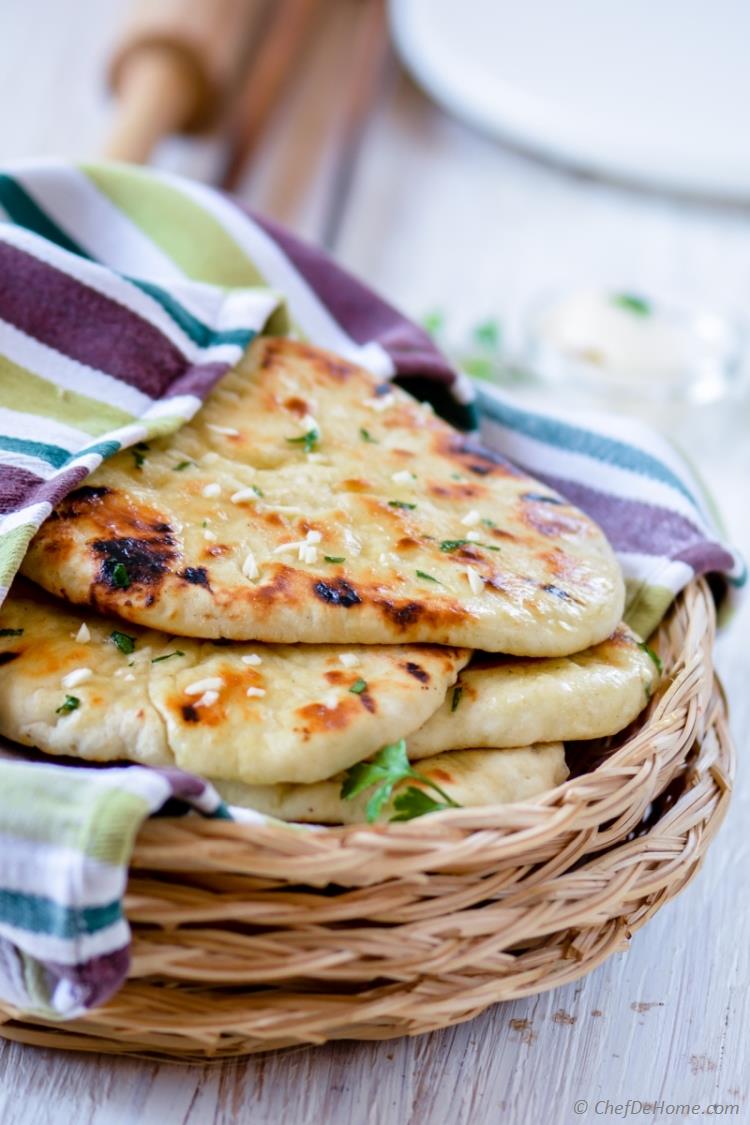 Okay, let me sum-up this new Naan Recipe for you quickly:

1) No yeast or much time needed to make these naans.
2) No egg-y smell or Baking Soda after taste. Only egg white and tad of baking soda added, yet lite and fluffy texture matching any store bought naan!
3) Good news!! These naans can be baked in oven and will not lose moisture!
4) Last but not the least, homemade naans gives you option to make it healthier. Use part all purpose and part wheat flour and also skip butter if you prefer.

If I may ask, what is your favorite Indian Naan? Yeast or no yeast? 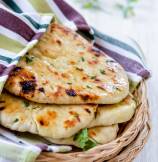 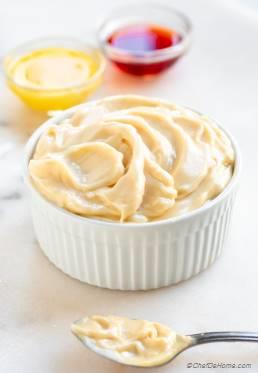 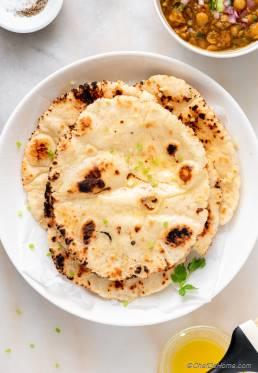 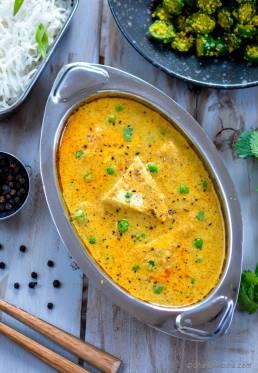