Ditch oven and bring home crusty bread. because I'm giving you an epic and foolproof bread pudding recipe that is prepared in slow cooker!

Bread Pudding - a quintessential comforting breakfast with layers of day old bread, soaked in egg custard and cooked until bread is crispy from outside and moist inside.

Friends, dust your slow cookers, and bring home some crusty bread... because today I'm giving you an epic and foolproof bread pudding recipe that is prepared slow cooker! With fragrance of cinnamon and sweetness of raisins, this breakfast can make any morning feel like holiday morning!

Bookmark this recipe, because you will never have to look for a slow cooker bread pudding recipe again! I have, what you call, perfected it for you!! 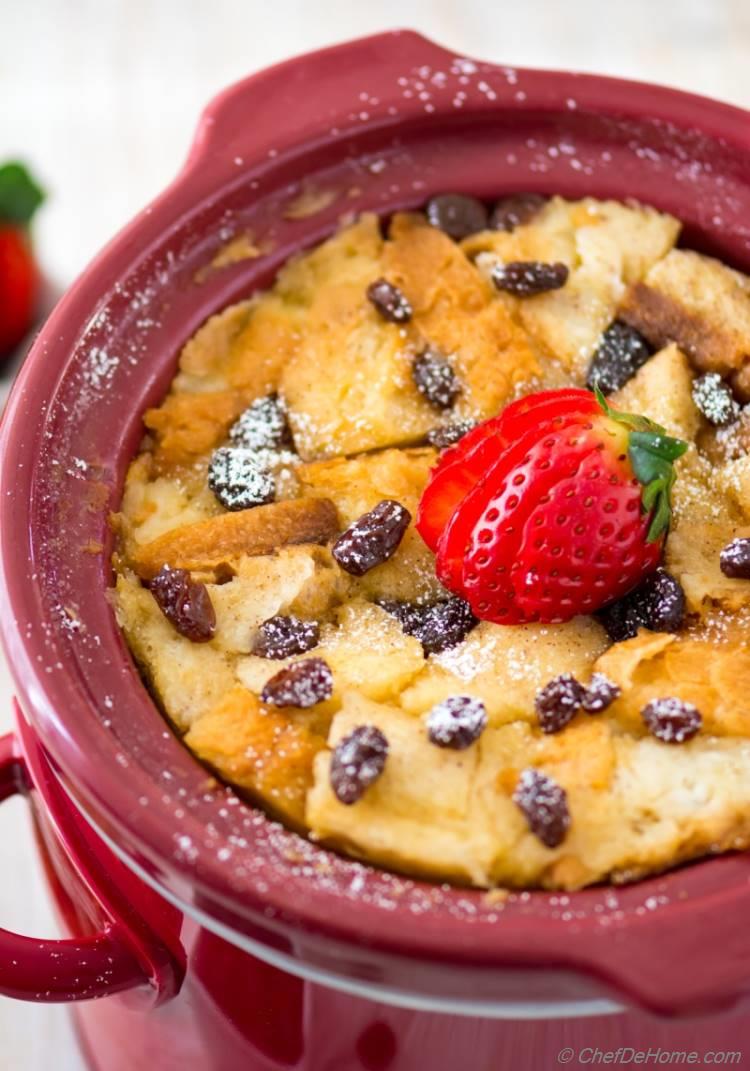 Now, before I jump to my quest of making bread pudding in slow cooker.. I must tell you that the base of this recipe is traditional bread and butter pudding. You can use this recipe, any time to make bread pudding in oven too. All ingredients like day old crusty French bread loaf, milk, sugar, butter and eggs, are easy to find. Other than that,  I have added special touch of heavy cream to give some richness to pudding... and added cinnamon and raisins for flavor.

Why? Because I like to spice-up everything. For me, there is no life without spice. :) But that is just me.. Like this Cinnamon Sugar Churro Waffles is THE epic waffle due to moist crispy churro coated with cinnamon!! yum!
Even though I highly recommend... but you can skip spices and make classic, just bread and butter pudding, only.

Most bread pudding recipes call for a casserole and a baking dish.. but I always wanted to cook bread pudding in a slow cooker and call for only crockpot!

Pause for sec... think.. you guys, isn't it amazing.... all you need to make an amazing Sunday brunch for family, is a crockpot and few basic ingredients!

(because that's the only thing I'm holding right now. Gosh, guys, I can't afford to drop my laptop. ;))

Last week, I made it my goal to get perfectly moist and crusty bread pudding in slow cooker. For three nights, after dinner or while making dinner, I grabbed my simple, cheap and best mini crockpot (you are looking at it), mixed my best known custard recipe, sliced some bread and waited...

On a side note, Vishal ate so much bread pudding, for breakfast, last week... he will not even let me bring bread home, no more. LOL!

By third try, I understood what will it take to make perfect crockpot pudding without burning the bread or leaving the center under done etc. etc.

Here is how I sum-up my Slow Cooker Bread Pudding Formula:

1) The part of bread pudding which touches crockpot gets crispy and crusty. So, for gooey and less crusty bread pudding, I use 2 quart slow cooker which keeps bread more moist and only a little gets crispy. Amount of liquid and size of cooker are very important. The recipe below will cook perfect in 4 hours at low setting. Low only, not high.
2) For more crust and faster cooking, I would use wider slow cooker such as 4 quart. The same recipe will cook in about 2.5 hours in a 4 quart cooker.
3) To ensure bread pudding cooks evenly, arrange the bread evenly in crockpot. For even distribution of liquid, soak each layer in custard. Press the layer at end to fit tight.
4) Towards last 30 minutes, test pudding for done-ness with a butter knife or long wooden stick. It should come out almost clean.
5) Once ready, switch off slow cooker and let pudding rest for 10-15 minutes before scooping.

Follow these and you will love using your slow cooker to serve warm, gooey, cinnamon-y bread pudding.

Specially during holidays, or when hosting grand Sunday family brunch.. while my oven is packed with other stuff.. I love how easily this bread pudding recipe will quietly get ready in slow cooker. so awesome and yumm!

I say, you bookmark these recipes for Easter or Mother's Day brunch! Surprise your family with a comforting homemade breakfast or brunch this weekend!

With this delicious note, I will sign off. See you with another homemade adventure.. soon!! 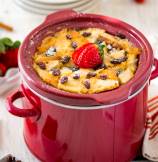 Day old bread works out best for me. I used rustic frnech bread loaf that I sliced and cubed myself.

For more cinnamon flavor, you can also use cinnamon-raisin loaf instead of plain french bread. 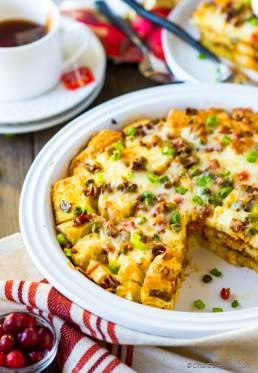 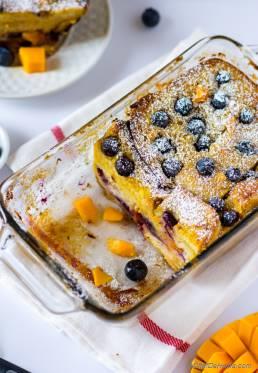 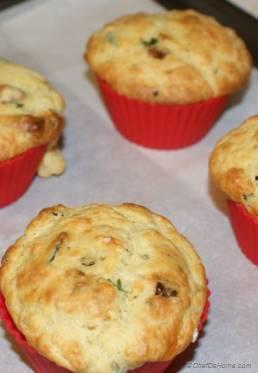