Pho, Vietnamese Noodle Soup with signature rich, meaty, and savory broth loaded with fresh toppings, bursting with flavor, and perfect for a chili night dinner. This scrumptious aromatic soup is must try once in lifetime.

Pho soup works multi-duty. It's spiced savory broth warms from within. It's nutrients are nourishing and toppings make it filling enough for a one-pot satisfactory dinner.

Today's recipe is also special because it is all prepared in Instant Pot. The authentic Pho is cooked low-slow for 8+ hours. But, with Instant Pot and few adjustments, this recipe gives you flavorful pho broth in just one hour.

Oh, and did I mention it tastes so sooo good. It is like flavor-of-fresh-chicken-noodle-soup-elevated-10-times. And aroma!! It alone can make you feel warm and cozy. Ready to devour dinner! That cinnamon, star anise, cooking meaty broth... yummm!

Friends, I have a LOT to share. Let's get started and make some speedy Pho Noodle Soup! 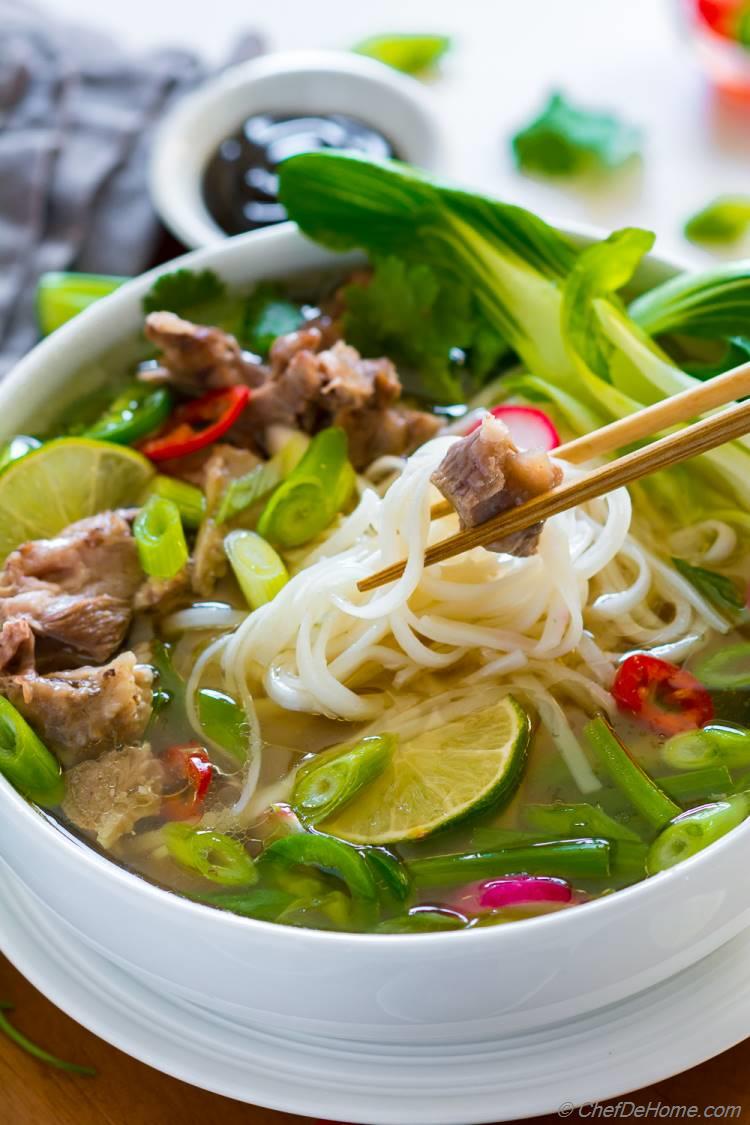 If you are new to Pho. I must tell you that Pho is popular street food of Vietnam. Sold by street vendors topped with variety of toppings including rice noodles, lots of fresh veggies, and hot slow-cooked meaty savory pho broth. It is prepared with various kinds of meats, basically meats and bones. Slow cooked bones make this soup hearty nutritious.

I have vivid memories of drinking bone-broth every week when growing up. My grandma always made sure that everyone had some bone-broth once a week to make bones naturally strong. More than nutrition, we looked forward to the scrumptious taste and family fun time together.

Chicken and lamb are only two kind of meats used in our kitchen. So, for this Pho Recipe, I decided to use familiar lamb meat instead of other varieties of red meats that are popular in traditional Pho. In-fact, first time I had Pho, 5 years ago, was prepared specially for us with lamb.  Can never forget that aroma.. I still link every batch of soup I make with that aroma. This one thing tells me my Pho Broth is headed in right direction.

Unlike Western soups, Pho broth has very less aromatic veggies. It is not masked in color or flavor with as carrots, celery  etc. Instead just uses yellow onion for sweetness and ginger for aroma.

The flavor of broth is clean and savory with hint of sweetness, aroma of ginger, cinnamon and other spices. Broth has no thickeners, no starch, not even soy sauce. If you like clean meaty soups, this will be your new favorite! 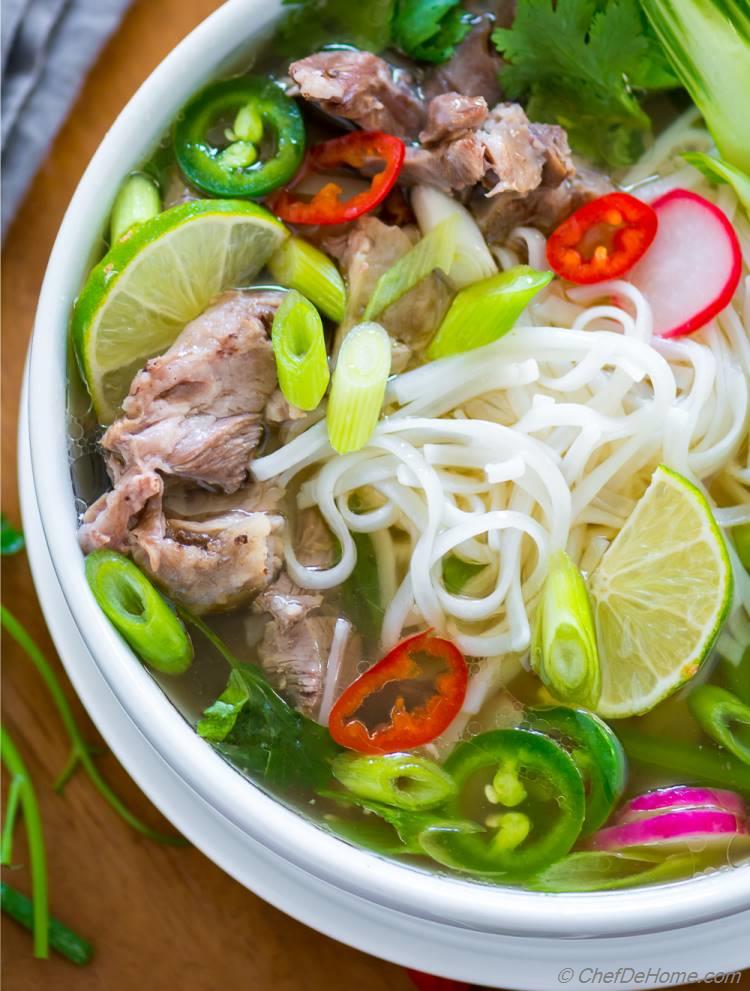 Traditional Pho soup broth is prepared low and slow. It is usually an overnight or whole day process in which meat is cooked low with pho spices for that authentic depth of flavor. At home, I don't have time or patience to spend whole day on a soup. This is where Instant Pot comes to rescue. Pressure Cooker setting of an Instant Pot has capabilities to extract that complex flavor from meat under one hour. I cooked whole lamb shank, bone-in chops to fall-apart tender meat and rich pho broth in just 45 minutes. Plus, even sauted flavor-base ingredients in the same pot!

For me, saving time and still eating homemade is more than enough. But. That's not the only reason for using Instant Pot.

To make Pho, first step is that meat bones are boiled in water to extract flavor. This part of broth is cooked covered so that soup does not get darker due to exposure of bones to air.

Now, guess what? With Instant Pot this step is totally eliminated. Cook everything together in one batch and still get clean clear and fatty broth with same depth of flavor.

As clean that I found it difficult to click picture of broth because it was so clean! For long, it went undetected from camera. 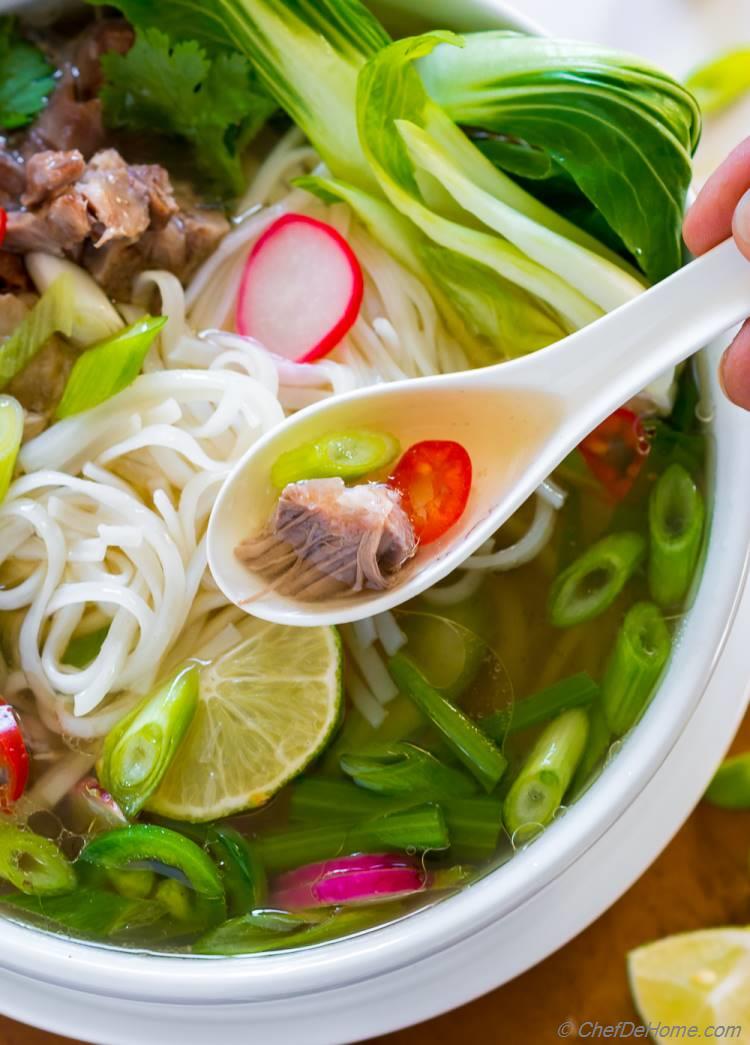 Why not cook just bones for broth?

For Pho Broth, I prefer bones that have meat with it. Pressure cooker does excellent job in extracting nutrients from bones. Using bones with meat let me have tender fall-apart meat to serve with Pho Noodle Bowl. Trust me. One lamb shank and 3-4 chops were sufficient for a big bowl of meat and delicious rich 9-10 cups of broth.

One special characteristic of Pho Bowl is that it is served loaded with toppings. Lots of fresh toppings which compliment the savory meaty Pho soup.

You can use your favorite as you prefer. I often add one or more of these toppings (depending on availability).

Note: The rice noodles used in traditional Pho are less wider than I used. (I used what I had in pantry.)

The spices used in pho are what brings out flavor of broth. The most common spices are star anise, and cinnamon. I also like to add coriander seeds, bay leaves, and black cardamom.

Other than spices, pho broth gets flavor from whole caramelized/charred yellow onion, and ginger. I also like to saute some shallot, chopped ginger, yellow part of lemon for 1-2 minutes before adding everything in. I think, this cooked Asian mirapox brings difference in flavor of broth.

You can wrap spices in a cloth or tea sack and boil with meat. I, however, prefer to add everything in the Instant Pot as-is. After the broth is ready, I like to strain the broth to remove cooked whole onion pieces and lemon-grass. Since spices used in who are whole spices.. It is very easy to catch'em with a regular strainer in one go. So, no need of wrapping spices in cloth etc. Just add everything in pot and let the Instant Pot do it's magic.

Note: If you can't find whole spices, then it will be best to wrap these in cloth since powdered spices will be hard strain.

Okay, too much chatting today. :-)

Let me sum up this pho recipe for you. And then, let's get cooking!

This Pho Soup is:

1) Easy to prepare with quick turnaround of 1 hour in Instant Pot. Only 10 active minutes prep.
2) Resulting soup is mild spiced, savory and loaded with nutrients. Perfect for a chili night dinner.
3) One pot meal start to finish. (I did boil noodles separatly for presenation. But you can cook'em in broth if you have noodle basket.)
4) Clean soup. Gluten free. Dairy free.
5) Last but no way least. So so delicious broth that you will start making it at home often. More often than visiting local Vietnamese Pho Noodle Shop!

Another resturant favorite at home. CHECK! 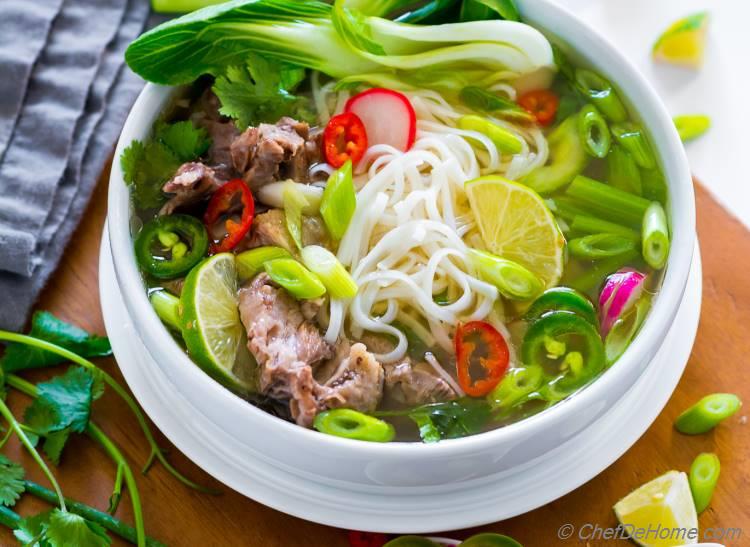 So, don't wait. Buy some meat, collect spices and put your instant pot to work. If you don't own an Instant Pot, now is the perfect time to gift one yourself. (affiliate link)

I wish you a wonderful long weekend. 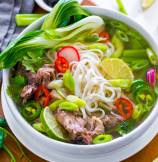 Smart Swap: Replace lamb with chicken for a Chicken Pho!

Instant Pot Tip:My Instant Pot was one line below Max with all these ingredients and water. If your pot can't take 9 cups, add 1-2 cups less water. 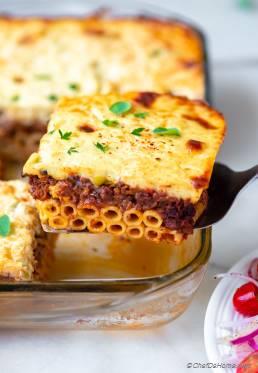 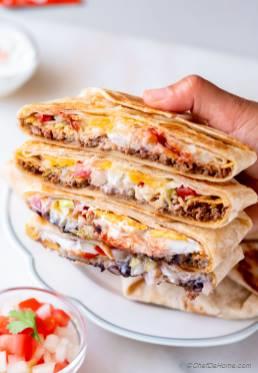